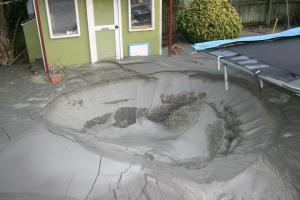 Burwood-Pegasus ward has been hard-hit yet again, with the 23 December 2011 earthquake “revitalisation” unleashing more sludge, anguish and despair: Swarm of quakes hits Christchurch + Tsunami chances slim, but quakes will continue + Empty Christchurch homes offer window to past etc. Parklands was the worst-hit locality this time, near to the offshore New Brighton epicentre.

For many in the seaside suburbs, this most recent seismic outburst has proven the last straw. Active lobbying for abandonment of liquefaction-prone areas, currently zoned blue-green but urged to go red, has begun: the Parklands Red-zone Action Group was born out of urgent response to new local land damage, as Parklands Review Action Group on 28 December on Facebook.

Earlier in the month, the Parklands Recovery Group had been formed around the wider range of earthquake issues and responses already then accumulated: facebook.com/pages/Parklands-Recovery-Group. The plethora of political layers beneath local government, CERA, CanCERN, community boards and the like just keeps growing – expressing but perhaps blurring the response clarity. A natural chaos prevails that is partially of the land.

A huge range of needs and concerns now characterise this quake-torn district, that people want immediate answers on. This post will collate the debate, and provide as many answers as possible, in an ongoing way.

e.g. A comment often heard is that it matters not how much Parklands or other residents agitate for red-zoning, it will never happen. The reason being that central government is simply out of cash and unable to purchase any more land. Period.

e.g. Tsunami – Shakes likely but trending away “earthquake scientists and Christchurch Mayor Bob Parker are expected to come under scrutiny today over why it is taking so long to get a tsunami warning system in place along the city’s coastline.. Mr Parker said the system was in the pipeline and remained a priority” starcanterbury.co.nz 6 January 2012

Newsflash: There can be no great tsunami risk in Pegasus Bay due to geology!

The Southern Alps are our nearest and greatest geological hazard here, as a major earthquake source, and we need to carefully remember and prepare for that.

Under-valued education like this has lead to confusion, pressure for and delivery of a potentially-deadly ‘silver bullet solution’ in the form of a tsunami siren system that is definitively bound to under-perform.

Keep moving and learning what is required though, for improving effect.